Colin Watts, Jenny Scribbins and Christine Swabey - members of the Kingston University Board of Governors

DOES THIS SOUND LIKE HONEST AND INDEPENDENT 'DELIBERATIONS' TO YOU?

"I just thought it was rather appropriate for the Music Department---orchestration of the collective grievance...." (laughs) - Prof Peter Scott, Vice-Chancellor
"Y ou could do a 'Lori Fredrics' and help yourself to a banana." - Jas Lally, Acting Director of Personnel

"But how did we ever get into this situation....because we employed them both." (laughs) - Colin Watts, Board of Governors
"That's, I mean, the real crime." - Donald Beaton, University Secretary


"I was trying to maintain a listening posture....It was very difficult doing that."
"It was quite hard, yes...quite hard."
"Very hard."


"This is like Dr Fredrics -- not shutting up."
"No, well they're very, very anxious about their own rights, but they don't seem to give a damn about anybody else's." - Donald Beaton, University Secretary and the Board of Governors (echoing Mr Beaton's sentiment)

And this was said after the tea break in the hearing in the presence of all:-


"And I just want to thank everyone for the way in which they have approached this, um it is obviously an extremely difficult and complex case, I hope you feel that we have listened to you with great attention. Be assured that we are completely independent and we will now think about what has been put before us." - Jenny Scribbins, Board of Governors

What do you think about this last statement in light of what was said previously?

And how does this all reconcile with the principles of the Nolan Report, to which the Board of Governors claims to ascribe?

To help you to evaluate that question, the following description is taken from the Kingston University Website:

How does the Board act?

The University expects its Board to abide by the seven principles of public life as identified in the Government's Nolan Report:
• selflessness
• integrity
• objectivity
• accountability
• openness
• honesty
• leadership

And now....Here's a complete and unedited recording one of the tea breaks so that you may hear some of these comments in their full context:-


And now for a recording of yet another tea break in its entirety:-


Interestingly, many of the current members of the Board of Governors of Kingston University are current/former officials at St George's NHS Trust, an organization that has, according to press reports, been accused of misrepresenting its financial position, leading it to be referrred to the Secretary of State for further investigation.

While the University has denied that the collective grievance against Dr Fredrics was orchestrated, its own 'independent' investigator appears to have a rather different view.

In a recent interview, when asked whether or not the University had initially been given a copy of his alleged notes from interviews with complainants, Zafar Ali has this to say:

"..and I thought they [HR/Personnel] wanted all my notes. And I met with them, saying 'you can't have my notes because they told us things that may affect Human Resources.'"

Mr Ali explained further that he couldn't very well turn over the notes to HR/Personnel because he might later have to question them on their contents.

What WAS in those alleged notes? Were there, indeed, statements that implicated HR/Personnel in orchestrating the collective grievance?

If so, is THAT the REAL reason why the University has, to date, refused to turn over signed statements from complainants?

Does Kingston University
Have A Culture of Bullying

The following is an example of a response from the Director of Personnel, Liz Lanchbery (Scholey) after she was informed that a staff member who had filed a grievance, which was not upheld by Mrs Lanchbery, had decided to excercise her right to resort to normal University appeals procedures.

This e-mail was sent to to the Dean overseeing the staff member, and indicates a clear intent to deny the staff member her statutory right of appeal by moving straight to a final disciplinary hearing, with an eye towards dismissing her forthwith. 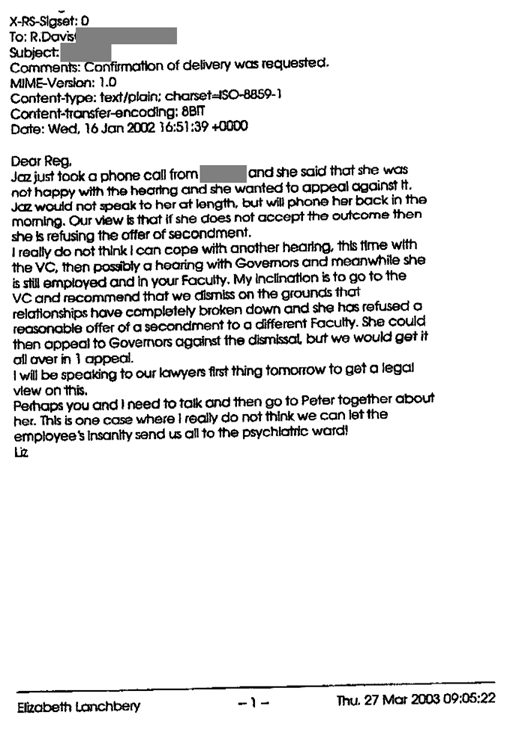 Do you think that it was appropriate and within the bounds of normal dignity-at-work discourse for the Director of Personnel to refer in such disparaging terms to a staff member by asserting that she was insane?

Is the use of such language a form of workplace bullying?

Does it appear to you that staff at Kingston University who exercise their legal right of appeal are being victimized by being prematurely subjected to disciplinary proceedings and dismissal on the supposed grounds that pursuing such an appeal automatically means that working relationships have irretrievably broken down, and that such a breakdown is solely the fault of the staff member?

Does it seem to you that this basis for dismissal, also known as "SOSR" (Some Other Substantial Reason) is being used by Mrs Lanchbery as a ruse to punish staff members, who are merely trying to have their concerns addressed to the full extent permitted under normal University procedures, with an eye towards improving their working conditions?

In this specific instance, if the staff member was not prepared to simply be transferred to another faculty on a temporary basis (for six months) as a first option, and if she instead preferred to have the root causes of her concerns resolved, whilst at the same time moving on a permanent basis to a different faculty, via the vehicle of an appeal to the Vice-Chancellor and, if necessary, the Board of Governors, was it right for Mrs Lanchbery to attempt to circumvent University grievance procedures by advocating her dismissal?

Mrs Lanchbery appears to suggest that if the staff member were to be disciplined and dismissed that any appeal to the Board of Governors would be preordained to fail ("we would get it all over in 1 appeal."). How did she KNOW in advance that a decision to dismiss would be taken by Prof. Davis following a disciplinary hearing, and that it would all be "over," unless she also knew something specific about the history and normal practice of the Board of Governors with respect to whether or not it would hear a dismissal appeal by a staff member in a fair and unbiased manner?

If Mrs Lanchbery was having difficulty with the notion of following normal grievance procedures, (a central duty of her position), which includes facillitating the right of an employee to appeal an initial unfavorable decision, should she have, instead, considered resigning her position as Director of Personnel?

Based on what you have read on this site, does Kingston University appear to have a practice of breaching statutory grievance procedures?

If so, do you think this is a fair and reasonable way to conduct business?

Of all aspects of institutionalisation of corruption that may be linked with stress, the one that is most disturbing is that of creeping induction: The essence of the process involves causing individuals, under pressure, to take small steps along a continuum that ends with evildoing. Each step is so small as to be essentially continuous with previous ones; after each step, the individual is positioned to take the next one. The individual’s morality follows rather than leads. (Darley, 1992) The implication is that once a new employee becomes a member of a corrupt organisation, there is no going back. They will accept and carry out corrupt orders. The moral conviction and courage needed to go back is so stressful that individuals prefer to comply...
1 Collective corruption can cause individual stress
2 Many become compliant to collective corruption and in order to reduce stress
3 Compliance is associated with strong group identification, setting the stage for institutionalisation of corruption
4 High-identifiers may feel stressed when the group is threatened andmay complywith corrupt practices to cope with the stress
5 However, newcomers and others who do not identify strongly with the group may still feel stress in complying with corruption and become whistle blowers