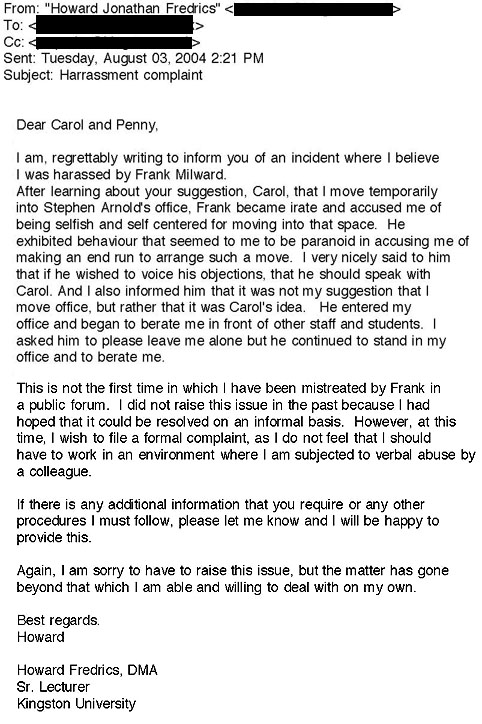 Here is a supporting statement from another staff member, which verifies Dr Fredrics' version of events:-

Here's an excerpt of a statement from yet another staff member concerning Frank Millward's conduct (as contrasted with that of Dr Fredrics):- 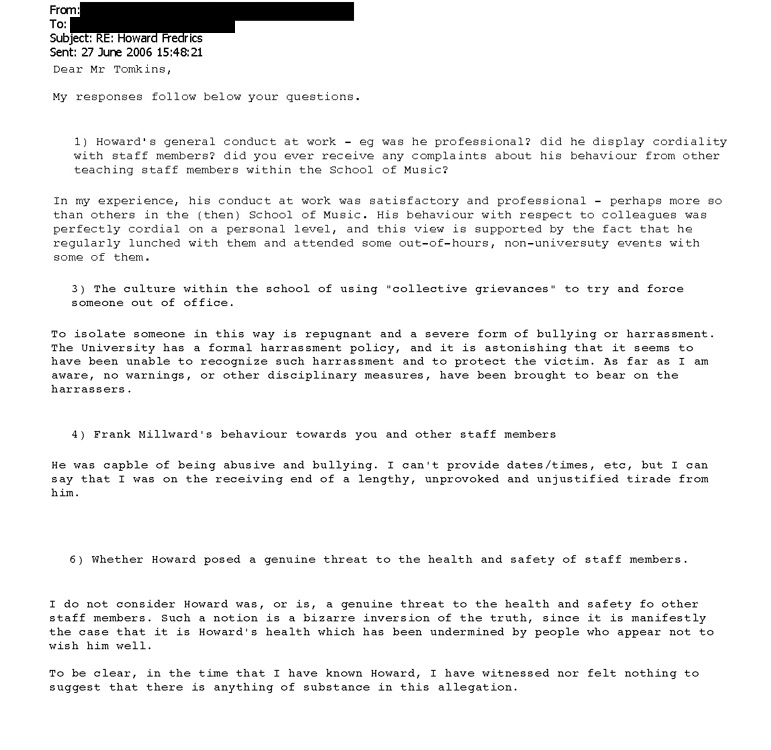 Dr Fredrics composed an opera on the subject of Jack 'Kid' Berg, some of which is set during the 1920s and 30s in prohibition-era New York, where notorious gangsters, such as Jack 'Legs' Diamond were part of the speakeasy nightclub scene. The opera contains a scene at the famous Silver Slipper nightclub, which was frequented by 'Legs' Diamond and his mistress, Kiki Roberts.

Many of Dr Fredrics' colleagues at Kingston University had recently attended the premiere performance of the opera, including both Mike Searby and Frank Millward. They were, therefore, familiar with the fact that gun-toting gangster, 'Legs' Diamond's character appears in the nightclub scene and knew exactly what Dr Fredrics was referring to when he made a tongue-in-cheek remark about having a gun -- just like all Americans (sic) -- in the context of a conversation where he was bemoaning the increase in gun violence in contemporary society.

Here is what Frank Millward wrote and sent to Dr Carol Gartrell, Mr Mike Searby and Personnel following their conversation: 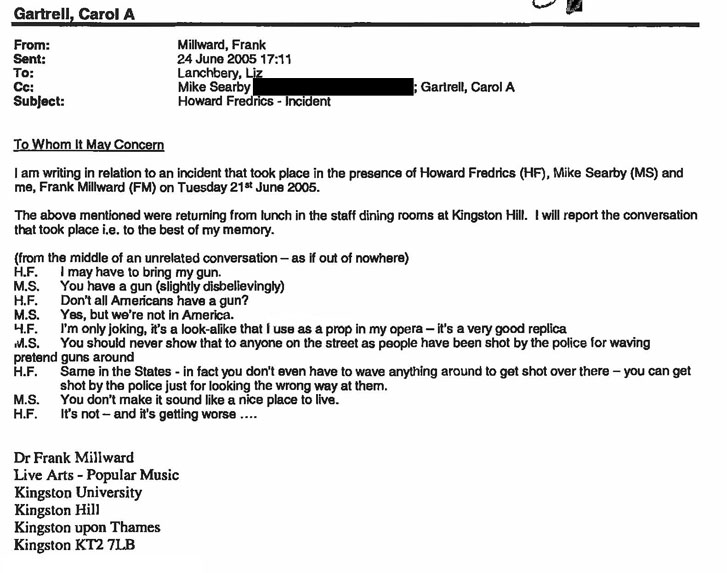 Click to listen to a song expressing how we felt when we read the above memo.

The following is a music video of the above song:-

And here's another song that expresses both how Artressa Phunding felt about Frank Millward's 'Toy Gun' e-mail, as well as how a number of other Kingston University staff members feel about the way THEY have been treated by Mr Millward.

The following is a music video of the above song:-

Yes, it is admitted that Dr Fredrics was, indeed, given a plastic toy gun by his solicitor friend for use as a prop in his opera.

But does this mean that Dr Fredrics posed a genuine danger to the safety of staff in the former School of Music?
Or did Dr Gartrell instruct staff to invent damaging 'evidence' as part of a plan to support management's case for dismissing Dr Fredrics?

Is it possible that Frank Millward was exacting revenge against Dr Fredrics for his August 2004 protected disclosure of bullying and harassment by Mr Millward?
Could that have caused him to be all too happy to comply with Dr Gartrell's request for 'evidence' against Dr Fredrics?

What do you think?