Can good academic standards co-exist with high levels of recruitment in UK HE institutions?

What is the role of an External Examiner in the maintainance and improvement of quality standards?

Is it proper to censor an Examiner's report or otherwise apply pressure on the Examiner to change his/her report?

Should External Examiners be chosen on the basis of their qualifications and experience or on the basis of whether or not they will write favourable reports, regardless of what they observe during the QAA process?

Let's see what Kingston University Principal Lecturer and MA Music Course Director, Mike Searby has to say about this:- 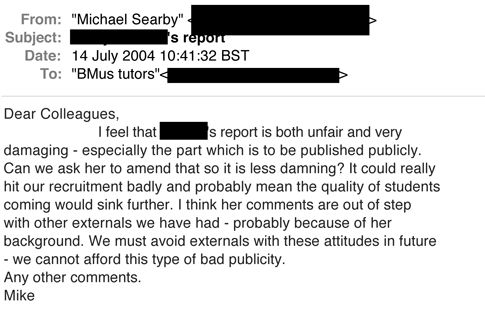 Here is the report to which Mr Searby refers

Following the issuing of this report, a call was put forth by School of Music management for staff members to recommend candidates to fill a slot to be vacated by the very External Examiner who wrote the aforementioned report. The following is an example of the selection criteria espoused by then Acting Head of School, Dr Carol Gartrell:- What exactly does Dr Gartrell mean by "sympathetic" and "constructive" in this context?

The following is an e-mail from Ms Gloria Toplis, BMus Course Director sent several months after Mr Searby's call for staff to "ask her [the External Examiner] to amend" her report:- The Daily Telegraph published an article on 1 July 2008 about the scandalous practices in the UK Higher Education sector surrounding the awarding of top degrees, in which it mentions Mr Searby's actions in connection with Kingston's External Examiner.

On 2 July 2008, the Surrey Comet reported that Kingston University denied the authenticity of the above e-mails and called them 'bogus':- 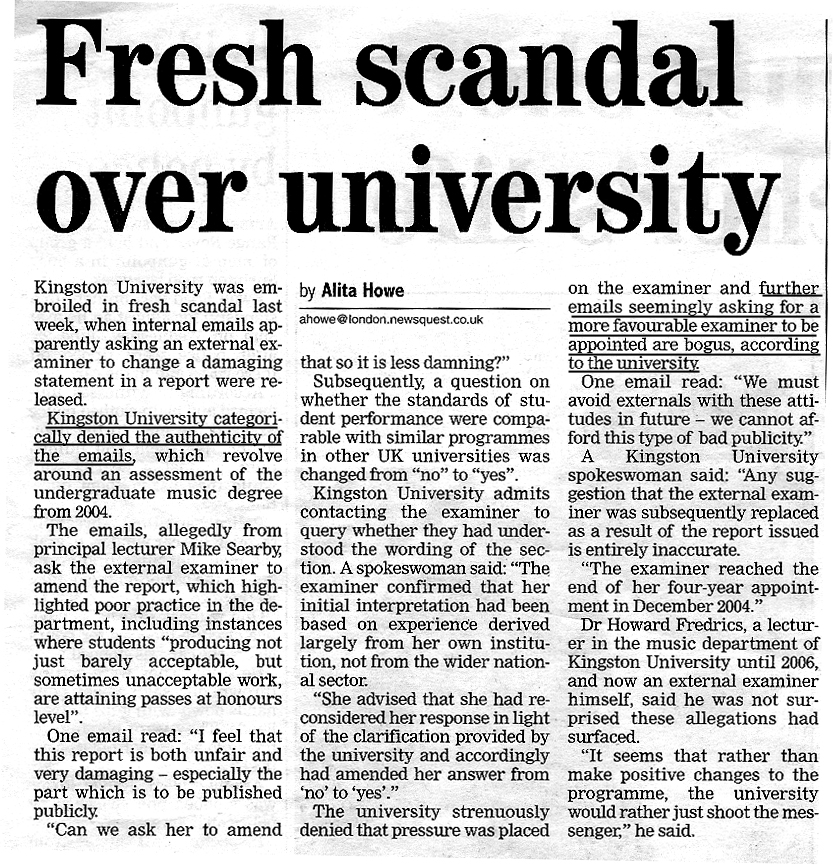 Yet what is quite interesting about the University's denial is that in an earlier BBC report, the University CONFIRMED the authenticity of the e-mails:-

On July 7, 2008, The Surrey Comet acknowledged that it got the story partly wrong. Kingston University did NOT refer to the e-mails as 'bogus,' however to date, they continue to categorically deny their authenticity. Is there really a difference?

What to YOU think?

UPDATE
On 30 October 2008, Peter Williams, Chief Executive of the UK Quality Assurance Agency (QAA) wrote a letter to the Parliamentary Select Committee on Innovation, Universities, Science and Skills in which he reported on cases of alleged quality issues. After investigating the External Examiner scandal at Kingston University, QAA determined that the allegations would be upheld and that discussion would be held with Kingston University concerning arrangements for publication of the University's investigation report.

The following is the relevant excerpt from Mr Williams' letter:-

What, if any disciplinary action has been taken against Mr Searby or Ms Toplis?
How about Dr Gartrell, who as Acting Head of School, was aware of and condoned the pressurising of the School's External Examiner?

The November 2008 Minutes of the Board of Governors of Kingston University reveal that the Vice-Chancellor, Prof Peter Scott raised a number of concerns about the University's involvement in improperly pressurizing an External Examiner in the School of Music into changing her report on academic standards in the School. This sequence of events led to a Cause for Concern inquiry by QAA, the British Quality Assurance Agencye. During the course of his presentation to the Board of Governors, it appears that Prof Scott was planning to meet with HEFCE Director, John Selby to discuss how the University might address the damage to its reputation caused by press reports that exposed this most recent scandal.

Do YOU think it is proper for the University's Vice-Chancellor to discuss how to mitigate damage to its reputation with the Director of a public agency, HEFCE, which is responsible for ensuring compliance with government regulations, including financial management of public funds by higher education institutions?

Whom do YOU hold responsible for damaging the University's reputation, if it was, indeed, damaged? Was it the person who reported the breach of procedure or was it the staff members who pressurized the External Examiner?

What, if any, responsibility does University management have for the alleged damage to the University's reputation?

What actions could/did they take that would be proper in light of the circumstances?

The following is an excerpt from the Minutes of the Board of Governors Meeting of November 2008:- The Artressa and The Pimp Show

Dr Howard Fredrics was dissmissed from his position as Senior Lecturer because of an alleged "breakdown in working relationships" which he supposedly caused, and because of "misconduct" in the form of a good faith critical report to his line manager regarding the performance of a colleague in his job duties.

If Kingston University is serious about its approach to dealing with staff who "cause" breakdowns in working relationships, why have they failed to take disciplinary action against other staff whose actions might be described as "critical" or "disrespectful" of colleagues?

Regarding one of these staff members, Mr Searby added that "if she was the last woman on earth, I would become gay."

Moreover, during two informal gatherings at the Albert Arms Pub, Mr Searby made comments concerning an alleged improper relationship between two staff members in the School of Music. He said that if one were ever faced with having to go up against one of these staff members, who happened to be a senior manager, then one could readily blackmail that staff member with threats of revealing the alleged affair.

In yet another incident, when referring to information contained in her application, Mr Searby made disparaging remarks about the discrepancy between the apparent age of a female job applicant's face and her hands.

Alas, such is the nature of daily discourse in the now former School of Music.

The following is from the 2008 RAE reports for Kingston University. Note that most of the 5.5 full-time staff entries are rated at or near the bottom of the scale. Is this what should happen when working relationships are 'restored' (i.e. by removing or driving away 'difficult' or 'expensive' staff members? ) :-

How Does Kingston University
Handle Validation
of Externally Taught Courses?

Kingston University offers a BSc (Hons) in acupuncture. In view of the fact that the Pittilo group has recommended degrees in acupuncture, there is enormous public interest in what is taught in such degrees, so I [Prof David Colquhoun] asked.

They sent the usual boring validation documents and a couple of sample exam papers . The questions were very clinical, and quite beyond the training of acupuncturists.  The validation was done by a panel of three, Dr Larry Roberts (Chair, Director of Academic Development, Kingston University), Mr Roger Hill (Accreditation Officer, British Acupuncture Accreditation Board) and Ms Celia Tudor-Evans (Acupuncturist, College of Traditional Acupuncture, Leamington Spa).   So nobody with any scientific expertise, and not a word of criticism.

When Prof Coquhoun filed a Freedom of Information request with the University to obtain copies of actual course materials (e.g. lecture notes, timetables, etc.), he was rebuffed by the University, who indicated that they did not have these materials.

Did this mean that they validated the course from the College of Integrated Chinese Medicine (CICM) without bothering to review such materials, and therefore, without seeing what was actually being taught?